Human Development is Fundamental to Thriving 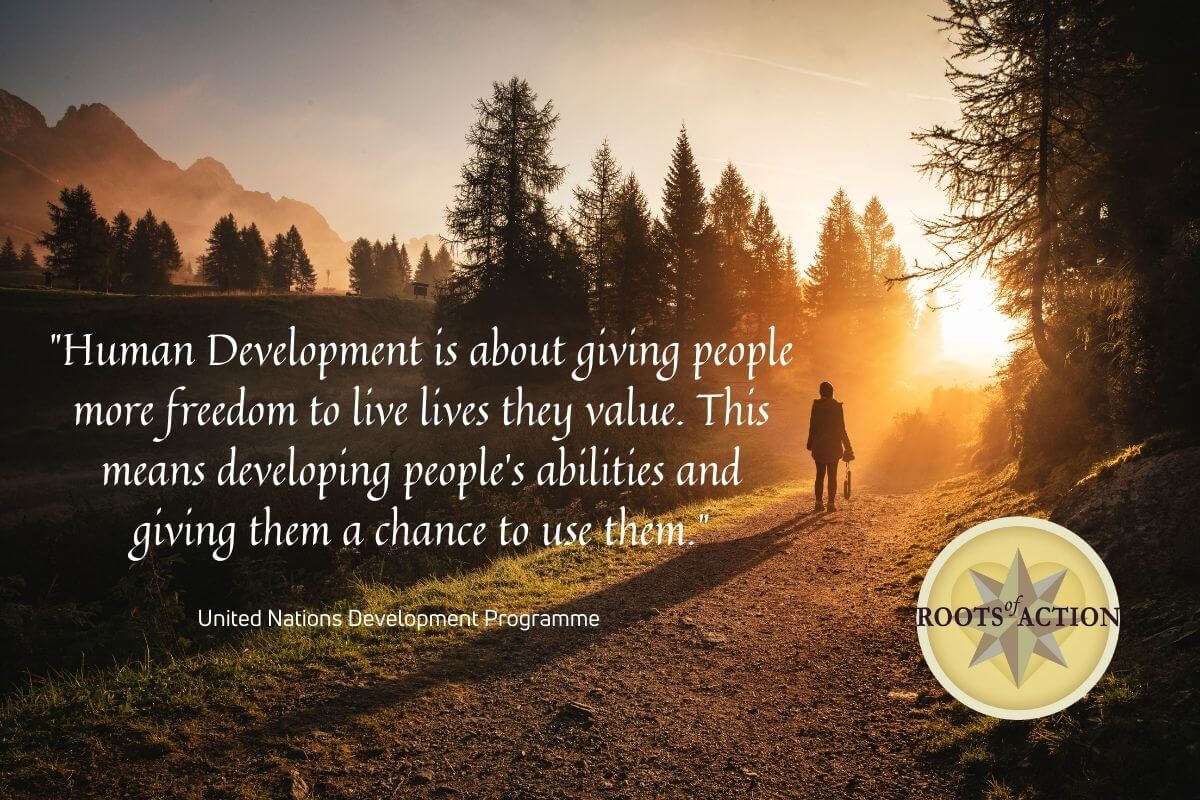 Theories in human development have driven our research at Roots of Action for more than a decade. The Compass Advantage framework is a simple and engaging lens to understand core abilities that contribute to human thriving. Through this lens, individuals and organizations can learn to strengthen abilities that have been shown to nurture human development from childhood through older age.

Our research began with a focus on adolescent development. We wanted to know how adults nurtured the development of young people in ways that fostered their engagement as responsible, participatory, and justice-oriented citizens. We soon learned the abilities that propelled youth to become purposeful citizens were the same ones that fostered human development at all ages. While Roots of Action shares articles and resources that bolster positive youth development (PYD) from kindergarten through high school, it is important to understand that the long-term goal of PYD is to promote healthy development throughout a lifetime.

What is Human Development? Why is it Important?

Human development centers on strengthening the attributes and abilities that help people flourish in life. According to the United Nations, it “is about giving people more freedom to live lives they value. This means developing people’s abilities and giving them a chance to use them.”

For young people, human development involves nurturing abilities that help them decide what matters most in life and encouraging them to determine and navigate their own paths. It is about facilitating meaning and purpose, rather than using grades and test scores as the sole measurement of self-worth. For adults, human development involves fostering abilities that give people the opportunity to live lives they value rather than using income as the sole measurement of success or wellbeing.

Human development is an important area of study. Multidisciplinary research shows that people can improve their lives and wellbeing at any age by enhancing their human abilities through positive relationships, experiences, and opportunities. In addition, the Human Development Index (HDI) is a tool for assessing a country’s development by the health and wellbeing of its citizens, not by economic growth alone.

Erik Erikson (1950) developed a theory that outlined eight stages of human development, from infancy through old age. Yet regardless of age or stage, there are core underlying abilities that are linked to human thriving throughout the lifespan. Development that begins during childhood is interconnected with adolescence and adulthood. That is why our current research using the self-administered Compass Survey of Core Human Attributes spans the ages from five through adulthood.

This article provides background on the research in human development that was used to create the Compass Advantage framework and the compass surveys. It is most helpful for those interested in using our work within schools, nonprofits, and organizations; and for researchers who wish to understand the concepts behind our work.

A Framework for Understanding Human Development 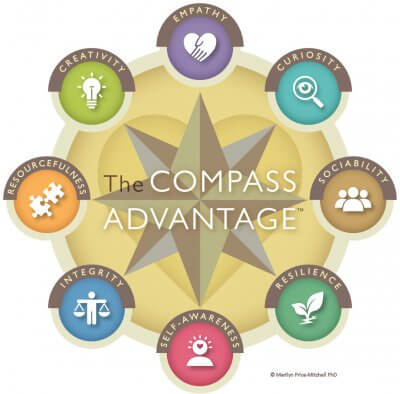 Beyond educational equity, the compass framework focuses on achieving developmental equity—the right of all children to have the relationships, experiences, and opportunities that help them thrive in school and life.

One of the premises of research in the field of positive youth development is that strengthening personal abilities, attributes, competencies, and civic values in young people promotes human development throughout the lifespan (Benson et al., 2007).

Researchers in youth and adult development have identified a variety of human attributes that enable individuals to positively contribute to self and society. Since Peterson & Seligman (2004) classified twenty-six character traits and six virtues associated with human development and thriving, thousands of studies have shown how internal abilities contribute to agency and wellbeing (Peterson & Seligman, 2004).

The Compass Advantage framework is grounded in systems theory. Our research explored the patterns within broad categories of abilities practiced regularly by exemplar youth. We discovered that young people who became agents of social change regularly demonstrated and practiced eight core abilities—curiosity, sociability, resilience, self-awareness, integrity, resourcefulness, creativity, and empathy—by the time they reached the end of high school (Price-Mitchell, 2010b, 2015). These teachable abilities are key components of social and emotional learning (SEL) and used to foster developmental and academic competencies in preschool through high school-aged students (Dusenbury et al., 2015).

These eight abilities have been widely studied as individual constructs by other researchers and found to be important for youth, adult, and societal thriving. Our research suggests there is a systemic connection between the eight abilities, meaning they work together toward the attainment of wellbeing.

Below is an introduction to each ability measured by the Compass Survey of Core Human Attributes.

Empathy is viewed through the compass framework as the ability to recognize and respond to the needs and suffering of others. A complex human attribute, scientists agree there are affective and cognitive aspects to empathy (Davis, 1983; Deutsch & Madle, 1975) and that empathy is related to prosocial behavior and altruism (Batson, 2010; de Waal, 2008; Eisenberg et al., 2007; Hoffman, 2008). It has been shown that empathy is foundational to a person’s ability to care for others (Slote, 2001, 2004).

Curiosity is viewed through the compass framework as the ability to seek and acquire new knowledge, skills, and ways of understanding the world. It is at the heart of what motivates kids to learn, provides a key pathway to student success, and keeps young people learning throughout their lives. Curiosity facilitates engagement, critical thinking, and reasoning. Multidisciplinary researchers have studied curiosity as a mental state (Inan, 2012), an emotion (Brady, 2009; Silvia, 2008b) and an intellectual or moral virtue (Baehr, 2011; Baumgarten, 2001; Peterson & Seligman, 2004).

Sociability is viewed through the compass framework as the joyful, cooperative ability to engage with others. It is derived from a collection of social-emotional skills that help students understand and express feelings and behaviors in ways that facilitate positive relationships, including active listening, self-regulation, and effective communication (Dusenbury et al., 2015; Mahoney et al., 2020).

Resilience is viewed through the compass framework as the ability to meet and overcome challenges in ways that maintain or promote wellbeing. Historically, the study of resilience has been the purview of human development researchers who have worked on identifying protective factors that promote resilience in children, particularly in at-risk populations (Luthar, 2015). Some theorists link resilience to aspects of personality like hardiness and ego resilience, a trait that reflects general sturdiness of character (Eisenberg et al., 2004). Resilience in adulthood has been studied far less than in childhood but a growing body of research links resilience to attributes like grit, persistence, initiative, determination and positive adaptation throughout the life span (Ong et al., 2009).

Self-awareness is viewed through the compass framework as the ability to examine and understand who we are relative to the world around us. It is developed through skills like self-reflection, meaning making, and the process of honing core values and beliefs. It is an essential aspect of human development (Ardelt & Grunwald, 2018).

Integrity is viewed through the compass framework as the ability to act in ways consistent with the values, beliefs, and moral principles we claim to hold. Rooted in centuries of moral philosophy and ethics, integrity is derived from the Latin word integritas, meaning wholeness. Carl Rogers (1961) first described psychological integrity as a time when a person’s feelings “are available to him, available to his awareness, and he is able to live these feelings, be them, and is able to communicate them if appropriate” (p. 61). Integrity has been classified as a character strength and virtue and linked to moral courage, honesty, responsibility, authenticity, trustworthiness, and positive human development (Peterson & Seligman, 2004).

Resourcefulness is viewed through the compass framework as the ability to find and use available resources to achieve goals, problem-solve, and shape the future. The literature on resourcefulness focuses on a common theme—the processes by which humans achieve goals. Rosenbaum’s theory of learned resourcefulness suggests that a repertoire of mastery behaviors that include planning, problem-solving, and evaluation help individuals attain higher levels of achievement (Rosenbaum, 1990, 2000). Psychologist Carol Dweck suggests that an individual’s beliefs about intelligence guide their goal-setting and corresponding performance. She described this belief as a growth mindset (Dweck, 1999, 2006).

Creativity is viewed through the compass framework as an everyday human capacity to produce new ideas, discoveries, and processes. It has been studied from multidisciplinary perspectives, including cognitive psychology (Ward et al., 1999); motivation (Collins & Amabile, 1999); personality (Feist, 2010; King et al., 1996), and systems theory (Csikszentmihalyi, 1999). The focus of everyday creativity is on the diverse ways people engage in activities that use their creative minds to improve themselves and society (Conner et al., 2018; Cotter et al., 2018).

The Compass Advantage framework and the Compass Survey for Youth Ages 10-17 can be easily integrated into a standards-based curriculum to bolster the knowledge, skills, and abilities that students are expected to possess at critical points in their education.

The framework supports Social/Emotional Learning Standards, including those developed by the Illinois State Board of Education. Their three SEL goals include:

With its focus on positive youth development and social-emotional learning, the compass framework also supports the mission of many kinds of schools, including the International Baccalaureate (IB) Learner Profile.

Learn how to use the compass surveys in the classroom and how to spark conversations about inner strengths.

Psychological wellbeing generally refers to a “combination of feeling good as well as actually having meaning, good relationships and accomplishment” (Seligman, 2011, p. 25). Researchers examining human thriving across the lifespan often conceptualize the term as a growth-oriented, developmental process (See, e.g., Benson & C. Scales, 2009; Bundick et al., 2010; Lerner et al., 2003). Su et al. (2014) defines seven core dimensions of psychological wellbeing, the first being subjective wellbeing in the form of high life satisfaction and positive feelings. Subjective wellbeing is known to be an internal barometer of how other aspects of psychological wellbeing are currently satisfied.

A core aspect of our research at Roots of Action involves studying the association between subjective wellbeing and the practice of curiosity, sociability, resilience, self-awareness, integrity, resourcefulness, creativity, and empathy in youth and adulthood.

Our research in human development and how it is linked to thriving is ongoing. Preliminary data suggests that when young people and adults practice all of the eight compass abilities in their daily lives, they report higher levels of subjective wellbeing.

How to Cite this Article (APA)