Ability to act in ways consistent with the values, beliefs, and moral principles we claim to hold. 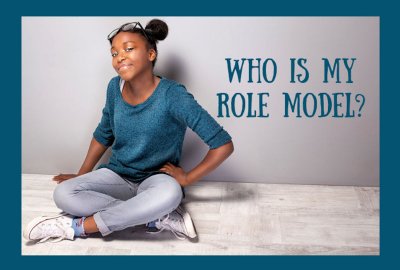 A positive role model serves as an example–inspiring children to live meaningful lives.

Role models show young people how to live with integrity, optimism, hope, determination, and compassion. They play an essential part in a child’s positive development.

Natalie, age 18, described her role model as a person with “a clear sense of what is important to her, putting forth the effort to improve and create things that will make a difference.” When Samira, also 18, feels “lazy, tired, or just plain annoyed,” she thinks of her role model and “is motivated to start working again.”

Natalie and Samira were part of my research study on how young people develop the skills, abilities, and motivation to become engaged citizens. They and 42 other college students recalled stories of their childhoods and adolescence and the kind of people who inspired them. You can read their stories and learn more about my research in Tomorrow’s Change Makers: Reclaiming the Power of Citizenship for a New Generation.

Role models come into young people’s lives in a variety of ways. They are educators, civic leaders, mothers, fathers, clergy, peers, and ordinary people encountered in everyday life. My study showed that being a role model is not constrained to those with fancy titles or personal wealth.  In fact, students were quick to state that “a true role model is not the person with the best job title, the most responsibility, or the greatest fame to his or her name.” Anyone can inspire a child to achieve their potential in life.

A Role Model Can Have Positive or Negative Impact

While my research focused on the positive impact of a role model in young people’s lives, role models can also have negative impacts. The American Academy of Child & Adolescent Psychiatry suggests parents speak to their children about role models and the qualities they possess. Discover who your child’s role models are and why they are admired. Who do your children look up to for inspiration and guidance? Why?

Sometimes a positive role model will make poor choices. Don’t let your children assume that negative and inappropriate behaviors that involve racism, sexual harassment, and dishonesty by admired public figures or friends are acceptable. When a role model displays behavior that is negative, talk with your child about your family values and why the behavior is unacceptable.

By the time children become adolescents, they should be able to differentiate the positive and negative behaviors of the people they admire. Most often, when role models embrace inappropriate behaviors, they lose their ability to inspire others. However, if a child becomes significantly attached to a role model’s ideology, power, or popularity, the young person may believe the negative behavior is acceptable.

When families learn to teach integrity and live their values, children and teens are much more likely to recognize and be inspired by positive role models.

The top five qualities of role models described by students in my study are listed below. These qualities were woven through hundreds of stories and life experiences that helped children form a vision for their own futures. By far, the greatest attribute of a positive role model is the ability to inspire others.

1. Passion and Ability to Inspire

Role models show passion for their work and have the capacity to infect others with their passion. Speaking of several of his teachers, one student said, “They’re so dedicated to teaching students and helping students and empowering students. That is such a meaningful gesture. They are always trying to give back to the next generation. That really inspires me.”

Role models live their values in the world. Children admire people who act in ways that support their beliefs. It helps them understand how their own values are part of who they are and how they might seek fulfilling roles as adults. For example, students spoke of many people who supported causes from education to poverty to the environment.  Role models helped these students understand the underlying values that motivated people to become advocates for social change and innovation.

A role model is other-focused as opposed to self-focused. Role models are usually active in their communities, freely giving of their time and talents to benefit people. Students admired people who served on local boards, reached out to neighbors in need, voted, and were active members of community organizations.

4. Selflessness and Acceptance of Others

Related to the idea that role models show a commitment to their communities, students also admired people for their selflessness and acceptance of others who were different from them.  One student spoke of her father, saying “He never saw social barriers. He saw people’s needs and acted on them, no matter what their background or circumstances. He was never afraid to get his hands dirty. His lifestyle was a type of service. My father taught me to serve.”

As Booker T. Washington once said, “Success is to be measured not so much by the position that one has reached in life as by the obstacles which one has overcome.” Young people echoed this sentiment, showing how they developed the skills and abilities of initiative when they learned to overcome obstacles.  Not surprisingly, they admire people who show them that success is possible. 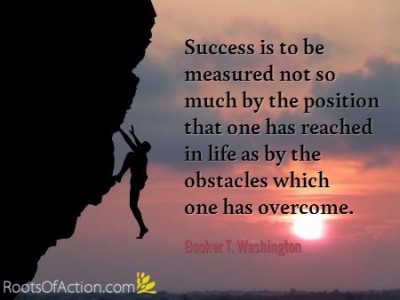 One student shared a story of a young man she met in Cambodian while on a service-learning project with her school. “He is an incredibly hardworking individual who has faced unimaginable obstacles in his life, yet continues to persevere to support his family and encourage his community. He survived the Cambodian genocide. He earned his education in a system where those who succeed are the ones who bribe officials. He has dedicated his life to give back to his community. Wow! What an individual; and the best civic role model!”

Research studies have long shown a correlation between positive role models and higher levels of civic engagement in young people. Positive role models are also linked to self-efficacy, the ability to believe in ourselves. In fact, the young people in my study admitted that had they not learned to believe in themselves, they would not have been capable of believing they could make a difference in the world!

Children develop as the result of many experiences and relationships. Role models play an important role in inspiring kids to learn, overcome obstacles, and understand that positive values can be lived each day. Whether you are a parent, grandparent, aunt, uncle, teacher, civic leader, clergy member, sports coach, after-school program leader, or a person who just happens into a child’s life, you have the ability to inspire!

You may also be interested in reading how role models influence youth strategies for success. New research shows that young people choose role models based on the mindsets they develop toward accomplishing their goals! Based on their mindsets, they will choose either positive or negative role models.

Feel free to use and share this infographic, excerpted from the information in this article. 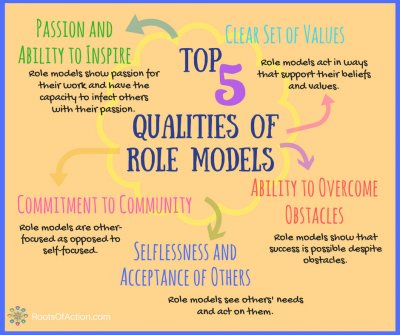