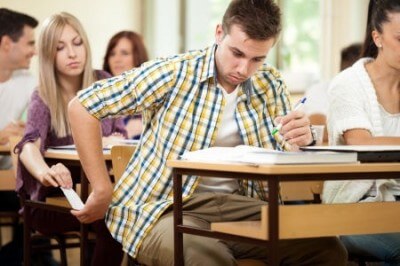 Students don’t cheat when the culture values speaking up, asking questions, and making a difference to others, because cheating serves no purpose. When students are on a mission, pursuing meaningful goals, solving problems, and learning from mistakes, cheating doesn’t make much sense.

The behavior of children in a school is mostly determined by the culture of the school. The school culture is manifest in every aspect, including how students are greeted and welcomed, how adults spend their time and treat one another, the language people use, the symbols on the walls, the art in the halls, our rituals, what happens at assembly, etc.

Award ceremonies and other systems of rewards and punishments, in particular how kids are graded are important examples of culture. What’s on their report card? What do we really expect of them? The report card is, after all, quite literally the “bottom line.”

Late one fall, two middle school teachers came to my office with a dilemma: “We don’t want to be guilty of grade inflation, but the grading system isn’t fair. Sara, for instance, works really hard. She always does her homework and participates in class. She is actually a great student, but she is math-phobic. She keeps failing her tests. We don’t know what to do.”

I responded, “You say she is a great student. What does that look like? What does it mean to participate in class?”

“She’s just great at working with others.”

“Well, she builds on other people’s ideas and she asks good questions. And well, it’s her attitude.”

Ten Disciplines of a Learner

We decided to continue the conversation on this topic at a faculty meeting. Several meetings later we had a new report card. We decided to give two grades and average them—one for “Learning,” the other for “Mastery.”

Sara might get an “F” in mastery and an “A” in learning, culminating in a “C” for the course. To be rigorous we picked ten observable behaviors and named them “Disciplines of a Learner:”

8.     Listens with an openness to change

Graded on a four point scale of  4=consistently, 3=often, 2=sometimes, 1=rarely, students could set goals to improve their learning.

Problem solved. And of course, Sara started getting B’s with no grade inflation, because she could see that her learning, not her intelligence, mattered.

As Carol Dweck would predict in her book Mindset the New Psychology of Success, Sara’s intelligence actually grew. The high schools appreciated our transcript because they received more information about what lay behind a B- or a C+. They began reporting back how our graduates were becoming leaders.

When students felt they could control their own progress toward success, the whole middle school took another giant step toward being a true learning community.

The Relationship between Cheating and Learning

What does this story have to do with cheating? According to Ross, Nisbett, and Gladwell in The Person and the Situation: Perspectives of Social Psychology, people’s behavior is mostly a function of their social context.  Cheating is a good example. If there are only a few narrow measures of success, then winning in school looks hopeless for some, and they take other paths. Cheating becomes a good strategy for winning at the game of school.

Cheating is bad citizenship, of course. But if being a good citizen is not an integral part of school success, because report cards only measure mastery, we put many students in a bind. All humans have a natural drive toward integrity, choosing between being the character you want to be and losing is a Sophie’s choice. The fact that cheating is an epidemic in many schools across the country is evidence of what we already know. Schooling is so often not an education.

To eliminate cheating, we must refocus all elements of school culture so that achievement is not an end in itself, but a function of learning. When learning comes first, cheating doesn’t make sense.

We can teach values till our faces get red, but students are mainly focused on learning how to play the game. Therefore, we must redesign the game to get better results. Aligning elements of culture to support learning produces not just higher academic achievement, but the kind of workers, citizens and neighbors our world needs.

Author of Genius in Every Child: Encouraging Character, Curiosity, and Creativity in Children, Rick Ackerly, M.Ed., is a long-time educator and school principal. He founded The Genius in Children blog and speaks to school and parent groups around the country.
Website // @RickAckerly // Facebook