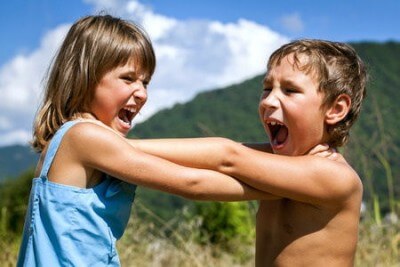 Every parent with more than one child knows how sibling rivalry can abruptly interrupt the peaceful coexistence of the entire family.

Sociability is the capacity to understand and express feelings and behaviors that facilitate positive relationships. Children learn sociability every time they manage to put their own emotions into words instead of using their fists, and every time they notice the effect their words have on another person.

Brothers and sisters often learn sociability the hard way, through sibling rivalry. Parents wonder whether to intervene when siblings fight with one another. What’s the best way to help kids learn to work things out for themselves?

The Research on Sibling Rivalry

Theodore Dreikurs, one of the fathers of positive parenting, theorized 50 years ago that sibling rivalry was an attempt by children to get their parents’ attention. The worst thing parents can do, he argued, is to get involved. A flurry of studies followed that confirmed that when parents stay out of children’s fights, children indeed fight less.

But over the years, subsequent research on sibling rivalry has added more complexity to that straightforward picture. Yes, siblings fight less without parental intervention. But, it’s now clear, that’s because the less powerful child is less likely to stand up for himself if he knows he has no leverage to convince his sibling to take his needs into account. Without parental intervention, the majority of disputes end with the less powerful sibling submitting to the will of the more powerful sibling (Felson, 1983). In fact, the presence of an adult within earshot who doesn’t intervene is associated with increased sibling rivalry and rates of aggression, even when that adult pretends to be completely oblivious to the children’s fight (Siegel & Kohn, 1959).

As one researcher observed, “Children…understand non-intervention as an implicit endorsement of their behavior, which may lead to more frequent or more aggressive conflict (Perlman & Hildy, 1997).”

It’s certainly true that parental intervention in which the parent decides who’s right and tells the children how to resolve the issue increases sibling rivalry. That approach always worsens the feeling of competitiveness between siblings. It doesn’t matter who is actually right or wrong, even if the parent has the wisdom of Solomon. When one child “wins” the argument because of parental intervention—and make no mistake, both children do see the parent siding with one child as that child winning—the “losing” child becomes resentful and more likely to initiate another fight, out of either revenge or a desire to settle the score.

When parents follow these simple guidelines, children develop better problem-solving skills. The less powerful sibling is more willing to stand up for his needs. The children are more likely to come up with equitable solutions. And as a result, sibling rivalry decreases. Even when kids do fight, the parental intervention has made a difference: less physical aggression (Perlman & Hildy, 1997) and more sibling references to their feelings and to social rules about fairness (Dunn & Munn, 1986). This approach gradually clears up the feeling each child has of being unfairly treated, so sibling rivalry continues to diminish over time.

From Sibling Rivalry to Sibling Peace

Children learn to make peace when, while encountering conflict, they practice resolving it themselves using the skills that create peaceful outcomes, identifying and expressing their own needs, listening to others, seeing multiple perspectives, and problem-solving to agree on win/win solutions that serve everyone.

Just as we’re very involved as kids start using the potty and eventually not involved at all, it makes sense to be very involved as kids start learning conflict resolution skills, and eventually not involved at all.  If you take this approach of coaching your children to work together to find solutions, you’ll find that over time their sibling rivalry will dramatically diminish. They won’t need your intervention because they’ll learn how to express their own needs and how to listen to the needs of their sibling. Eventually, you’ll find yourself listening proudly from another room as your children work together to find their own solutions to their disagreement.

Purchase Dr. Laura Markham’s book Peaceful Parent, Happy Siblings: How to Stop the Fighting and Raise Friends for Life. This book presents simple yet powerful ways to cut through the squabbling and foster a loving, supportive bond between siblings, while giving each child the vital connection that he or she needs.

Other Articles You May Enjoy