Parents who create positive home learning environments also understand that fostering character traits for kids is as important as academics and homework. They know that family values get passed from one generation to the next.  But how to instill values and positive character traits often seems mysterious.

Today, many children are losing hope, giving up on life, and feeling insecure about themselves at alarmingly young ages. Maria Rose Reifler, a gifted fifth grade teacher in East Los Angeles, asks, “Where are the parents?” And for good reason.

Parents are part of the solution. They can help reverse this trend by taking an active role in developing character traits for kids. The ways in which families talk about and reinforce character development from preschool through adolescence is vital to positive youth development.

Unless you are an academic researcher, don’t be concerned about the minor and unique differences between character strengths and character traits for kids. They are all important!

As a researcher in the field of positive youth development, I have studied character traits for kids for more than a decade and how those strengths contribute to wellbeing throughout a lifetime. First summarized in my book, Tomorrow’s Change Maker’s: Reclaiming the Power of Citizenship for a New Generation, the eight core abilities are:

You can read about the academic research on these eight aspects of character or about The Compass Advantage framework designed for use by parents and educators. Rather than one trait being more important than another, our research suggests that it is the systemic relationship between these eight strengths that contribute to wellbeing.

Use Praise Wisely to Reinforce Character Traits for Kids

I often hear parents of young children say “Good job!” when a child does something noteworthy. But do children understand the message behind this type of general statement?

As children get older, they get more and more generalized praise. Perhaps they receive a trophy for being on the winning team. They might receive congratulatory remarks on good grades or for participating in a performance or special event.  In fact, many children get praised for everything, in the mistaken belief it will increase self-esteem, confidence, and other character traits for kids.

Parents have an opportunity to help kids identify and build on their character traits and strengths by changing the way they give praise.  I’m not suggesting that all generalized comments be eliminated. Rather, whenever more specific praise can be given, the more valuable it is for a child.  Here are some suggestions:

Recognize Positive Character Traits in Others

As children learn to become aware of character traits, they also learn to identify character traits for kids and adults. And when they do, they eventually develop role models who inspire them.  One way to teach kids to recognize character traits in others is through books and movies, where they are well exemplified.

Whether geared for very young children or adolescents, there is rich opportunity to talk about character traits for kids and grownups as parents and children reflect on movies and books together.  Even cartoon characters exemplify character traits!

Dr. Ryan Niemiec is a psychologist, movie critic, and author of Positive Psychology at the Movies: Using Films to Build Virtues and Character Strengths. In his book, he lists a myriad of movies for older children that focus on different character strengths and virtues. Some of his favorites, organized by the VIA Institute’s list of strengths are:

Engage in Conversations that Matter 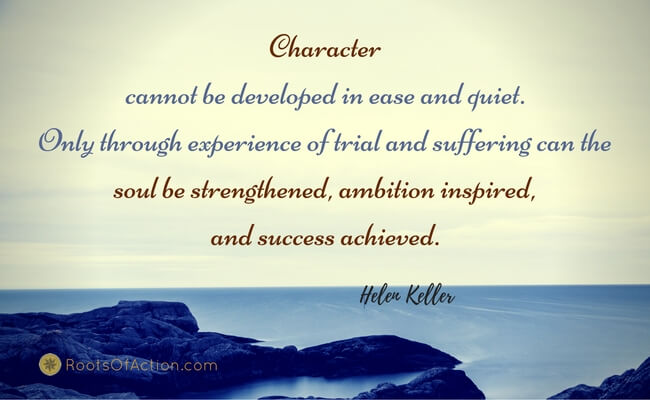 Families and children also experience their own trials and challenges. Helen Keller’s words are relevant as children discover they can succeed when they feel strong on the inside: “Character cannot be developed in ease and quiet. Only through experience of trial and suffering can the soul be strengthened, ambition inspired, and success achieved.”