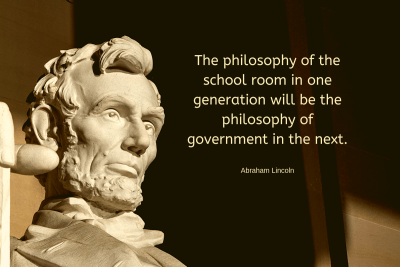 What skills do future leaders need? The answer may surprise you. Research suggests that great leadership is not about a bulleted list of teachable skills, but about the quality of the person.

Why is this important to parents, teachers, and others who imagine the future leadership potential of today’s young people?

Researchers understand that the path to future leadership begins today—in a child’s growing up years. Leadership often takes active shape by the time young people reach adolescence. Its greatness cannot be ascertained in these years and many future leaders are not identifiable in their teens. But the roots of leadership are being nurtured during this formative time, through a young person’s relationships and life experiences.

If democracy depends on future leadership, then it is time to prioritize how we nurture leadership in families, schools, and communities and what those characteristics look like in action.

In her book, Leadership in Turbulent Times, Pulitzer Prize-winning historian Doris Kearns Goodwin studied the lives of several U.S. presidents who led the nation through tremendous national crises. Rather than distilling leadership into neat bullet points, Goodwin’s genius is in how she described the rich context of the stories that ultimately revealed each man’s character. From their boyhoods to early-adulthood traumas that grew their resilience, we are reminded that leadership is as unique as each human being. Yet, the ability to lead is a developmental story with many common threads.

Franklin D. Roosevelt, for example, had extraordinary empathy that evolved from his experience with polio. He was able to connect to people that were suffering in ways others could not. Today, experts agree that developing empathy is a key to raising healthy, thriving children.

Lincoln showed remarkable humility, a characteristic that not only enabled him to see the potential in others but also appreciate his own strengths and weaknesses, important aspects of self-awareness. Despite suffering from debilitating depression, Goodwin suggests that Lincoln’s wit and sense of humor helped explain how he sustained his career. Today, researchers view humor as part of human creativity.

More than most presidents, Lincoln strived to be a better person, always asking others to help him learn. Learning is all about curiosity, an internal force that drives critical thinking and reasoning.

Each of the presidents Goodwin studied was a great communicator. All understood how to communicate, given the technology of their times. They knew how to use storytelling to show people how their lives were connected rather than separate. This enabled them to stand with others for what they believed, a characteristic of integrity.

Another common trait was their ability to manage their thoughts, emotions, and behaviors in ways that produced positive results and learning. Psychologists refer to this ability as self-regulation and it’s one of the most important elements of sociability.

For example, Lincoln designed a method for calming his anger by writing what he called “hot letters.” When he was angry at a General for not following his orders, he would sit down and write a long, emotion-filled letter of criticism. Then he would put the letter aside and sleep on it. Most often, the letters would never get sent because he understood that his strong emotions would have a negative impact on morale. Lincoln’s “hot letters,” marked “never sent or signed” were not discovered until the 20th Century.

Roosevelt also devised an outlet for his anger. It would take Roosevelt five or six drafts to write his “Fireside Chats.” The first would be filled with anger and bullying, often calling Congressmen “traitors” by name. Subsequent drafts allowed him to purge the anger from his system to when, in the final draft, he achieved the core of his leadership message.

How do we teach self-regulation in today’s digital world, when spur-of-the-moment Twitter storms have replaced the practice of sitting with one’s emotions? It is more difficult, for sure. Yet self-regulation is one of the most important qualities for a future leader.

What Goodwin showed through the lives of the leaders she studied was that leadership is about core human attributes. Not all leaders have the same capacity for empathy, curiosity, resilience, humility, ways of controlling emotions, and other qualities that leaders exhibit. But each leader has a unique combination and set of qualities that set them apart from others in certain circumstances.

The message gleaned from Goodwin’s book is if you care about future leadership, teach children how to be quality people and allow them to live their own lives. Lincoln and FDR were not without flaws. But despite their human failings, they learned from their mistakes and grew more resilient from the life challenges they faced and overcame.

On a recent episode of Fareed Zakaria called “How to Lead,” General Stanley McChrystal, author of Leaders: Myth and Reality, said it best: “Leadership is about you and a relationship to people….I think Americans are looking in the wrong place for leadership. I think we have to start looking in the mirror. We need to understand that leaders aren’t this unicorn that shows up suddenly and takes us somewhere. Leaders are people we empower, we follow, we vote for. We have responsibility. Leaders ultimately reflect the values we make them reflect. Leaders will reflect who we want to be. We need to look in the mirror and decide who we are, who we want to be, what’s important to us.”

How to Cultivate Future Leadership

Developing future leaders begins in childhood and adolescence. It begins, as General Stanley McChrystal suggested, by reflecting on our values as families and institutions of learning. Family values reflect who we are and how we parent. Teachers are uniquely positioned to teach empathy and other human qualities that not only help children discover personal success, but also contribute to the betterment of society. And as Lincoln eloquently said, “The philosophy of the school room in one generation will be the philosophy of government in the next.”

Future leadership qualities are human qualities. Goodwin carefully described the importance of self-regulation in leaders, an attribute that is increasingly discussed in today’s world of social media. Despite its challenges, parents and teachers can positively impact the development of self-regulation. The Child Mind Institute explains why some kids struggle with self-regulation and how these skills are taught. Clinical psychologist Dr. Matthew Rouse explains that “the key to learning self-regulation skills is not to avoid situations that are difficult for kids to handle, but to coach kids through them and provide a supportive framework.” He points out that kid’s tantrums and impulsivity can make adults feel discouraged but that consistency and age-appropriate levels of communication with children are key.

Great leaders know how to develop a team that accomplishes goals. Future leadership depends upon children having a team of families, schools, and communities that share common values and strive to instill those values through developmental relationships with young people.

What Is Self-Regulation? (Published by PositivePsychology.com)

How Can We Help Kids With Self-Regulation? (Published by the Child Mind Institute)

Collective Impact for Youth: Is Your Community Making a Difference? (Published by Roots of Action)

Does Your Classroom Cultivate Student Resilience? (Published by Edutopia)