Are Kids’ Social Skills Declining in the Digital Age? 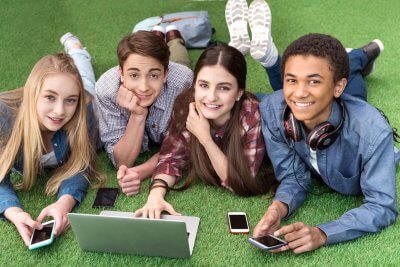 Adults have long speculated that technology has a detrimental effect on kids’ social skills.

Research has reinforced this speculation, including a UCLA study that conducted an experiment with 51 sixth graders for five days—not a large sample for reliable conclusions.

Theories about how children are losing their ability to communicate due to technology have become popularized and circulated widely on social media by authors who make claims with little evidence to back up their assertions.

What we know is that the percentage of children using the internet at home has increased from 11% in 1997 to 60% in 2017.  A research study in 1998 initially showed a negative relationship between screen time and kids’ social skills, including an increase in depression and loneliness. A follow-up study by the same researchers in 2002 no longer found those negative associations. Why?

The change in data may suggest that as children have become more adept at using technology, the negative consequences have diminished.

One fact that most people agree upon is the importance of kids’ social skills to life success. If social skills are truly declining, then social scientists should be sounding the alarm. But are they?

In the latest edition of the American Journal of Sociology, researchers compared parents’ and teachers’ perceptions of kids’ social skills from data collected in a longitudinal study between 1998 and 2010.

This new study, led by Dr. Douglas Downey, professor at Ohio State University, is the first to take a deeper dive into a large, representative sample of American youth. Aimed at answering the question, “Are kids’ social skills declining?” researchers used statistics collected by the Early Childhood Longitudinal Study of 1998 and 2010 and the National Education Longitudinal Study of 1988. In all, more than 60,000 K-8 children were represented in the research.

In each of the studies used, teachers and parents were asked questions related to kids’ social skills, including their ability to form and maintain friendships, express feelings in positive ways, and get along with people who were different from themselves. The same questions were asked of teachers and parents over the twelve-year span when internet usage among American youth increased dramatically.

The Results: Teachers and Parents Weigh in on Kids’ Social Skills

During the years from 1998 to 2010, teacher perceptions of children’s social skills remained relatively unchanged as did their evaluation of kid’s self-control. The same pattern of perceptions continued as children progressed through first, third, and fifth grades. In fact, teachers rated kids’ social skills slightly higher in 2010 than in 1998.

A similar narrative was reported by parents. Parents rated their children’s social skills much like teachers, with slightly higher evaluations at the end of the twelve-year period than at the beginning.

The bottom line is that no decline in kids’ social skills were noted by teachers or parents during this period of increased internet activity.

Only Part of the Story

While this new study presents a reassuring picture that kids’ social skills have not suffered as the result of technology use, it is important to note that sociability is only one aspect of thriving. Abilities like resilience, self-awareness, and resourcefulness—among others—play an integral role in positive child and adolescent development.

A growing number of scholars are studying these and other developmental attributes of thriving, including the potentially positive effects of internet usage on children. For example, researchers have observed how email and social media help students build and maintain social networks. New media can enhance existing friendships, negotiate parent-child relationships, and link kids to online interest-driven groups that boost their creativity.

Recent research about graphic animations (GIF’s) suggest these images can convey nuanced and complex layers of meaning that are not possible with text-only or face-to-face communication. Hence, studies are beginning to show that people may be overestimating the negative consequences of technology, not only on kids’ social skills, but in other areas of their lives as well. In fact, studies suggest that new technologies may be enabling more effective face-to-face connections.

Why Kids’ Social Skills Are Not Declining

Dr. Downey and his research associate Dr. Gibbs reflected on the results of their study, asking “Why did children’s face-to-face social skills not decline in the way most would have expected?”

They believe that “moral panic” over the predicted consequences of new technology led adults to believe that children’s social skills were in a free fall. This belief implied the assumption that sociability evolves in a straightforward manner. For example, if you believe that more time on the internet leads to less face-to-face interactions, you might also believe this leads to a decline in social skills.

Rather than undermining social relationships, the authors suggest that “screen-based technologies may be better understood as providing a new platform by which children seek autonomy from parents, develop group norms and sanction peers, build and maintain identities, and in some ways, develop social skills.”

Based on this study, should parents limit children’s screen time? If you are concerned with a decline in kids’ social skills, this study shows no evidence that doing so would have meaningful benefit.

That said, there may be other very good reasons to limit screen time. There are many differing opinions and research, including surprising insights from teens themselves.

Related Articles You May Enjoy