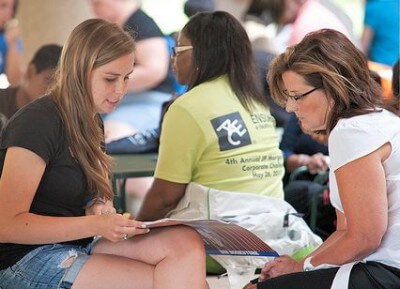 Were you one of the thousands of parents who recently left your college freshman in an unfamiliar place?

For college freshmen and their families, September is usually a time of excitement and trepidation – an honored American rite of passage. But what has changed for you and your child? And how will your son or daughter continue to need your support?

It has been over ten years since we traveled from Seattle to Washington D.C. to take our daughter to college. I clearly remember the buzz of freshmen making their way through orientation, parents lining up at hardware stores to buy extra picture hangers, and the churning in my stomach as we said our goodbyes. What laid ahead for our daughter? Developmental growth and maturation facilitated by unpredictable life experiences and lots of parental love, guidance, and support!

Three weeks after her college orientation, America was attacked by terrorists. It was September 11, 2001. We heard the news that a second plane was headed for Washington D.C. – our daughter was just a few miles from the Pentagon. We were numb with fear until we knew she was safe. It was the first in a series of unpredictable events, relationships, and experiences that would shape her life and the lives of other freshmen. Like students everywhere, our daughter was about to face and overcome new challenges. She was beginning her journey into late adolescence and young adulthood.

Going to college is a big step in a child’s life. They will gain new knowledge and meet new friends. They will experiment with new behavior and reflect on the people they want to become. Hopefully, they will graduate and take their knowledge, skills, and experiences into the world of gainful employment.

But parents should be aware: Your child is still an adolescent! The development that happens during these years is immense. While many parents believe adolescence occurs between the ages of eleven and eighteen, most social scientists consider it to be much longer – stretching into the early twenties. In fact, another important period of development, young adulthood, occurs well into the late twenties. The bottom line – today’s college freshmen depend on parents and social support systems much longer than previous generations.

There are many complex reasons why the period of adolescence is longer for kids growing up in today’s Western societies. The key reason is that children are given fewer responsibilities and are treated as more dependent than their parents or grandparents were at similar ages. This does not give them opportunities for planning, preparing, and executing – essential skills that help develop initiative and teach them to make successful transitions. Children with learning differences move through adolescence even more slowly, requiring greater parental support.

Our daughter took five years to graduate after transferring to colleges in Oregon and North Carolina. She changed majors several times, worked numerous part-time jobs, and experienced the normal highs and lows associated with late adolescence. In 2010, she graduated from law school in Virginia, returned to Seattle, and passed the Bar Exam.  She has since worked hard getting legal experience through unpaid internships. But like many of her law school classmates, she marked the tenth anniversary of her arrival at college as one of America’s millions of unemployed. It was another obstacle to overcome! And another opportunity for her parents to remember the importance of faith, hope, and love.

As a developmental psychologist and a parent with a ten-year retrospective on college orientation and beyond, I offer a few nuggets of wisdom for parents of new freshmen. Above all, remember that this transition is just one of many steps in the period of development known as adolescence. You may have left your son or daughter at college, but they will be your child for the rest of their lives!

Your child will always need three things from you: faith, hope, and love. Whatever your religious beliefs, you have already instilled your son or daughter with values that will last a lifetime. Have faith those values will endure. Supporting your child’s college education provides hope for a more fulfilling future. Help them hold onto that hope, no matter what.  Love them, no matter what. With faith, hope, and love as the foundation of your relationship, here are ten ways to support your child’s development as they enter college.

Ten Ways to Support Your Child’s Development through College