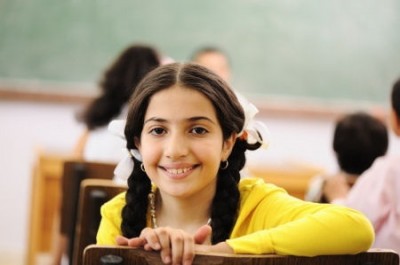 Middle school is often linked to that awkward stage of development when young people start to question their confidence and abilities. This occurs as they gain awareness of the world around them and as they compare themselves to friends and classmates.

Middle school is also a time of accelerated learning and curiosity, especially the kind that happens on the inside. It’s the kind of learning that isn’t measured by grades. Yet it is the learning that often determines whether children will succeed in school and in life.

I recently had the pleasure of meeting with a small group of 5th grade girls. They had been brought together by a parent, also a former teacher, who is helping them learn about the The Compass Advantage – an evidence-based model for understanding the inner abilities children and adults need to succeed.

The group, which had been meeting monthly for the last half of their 4th grade year, focused on the fears, excitement, and changes that middle school might bring. Now, their middle school years had finally arrived. Instead of taking the bus each day with kindergartners, they rode with high school seniors!

I felt honored to be invited to the first meeting of their middle school year. My task was to introduce them to the eight abilities of the Internal Compass and talk about how these abilities would develop as they grew to be 12th graders.

They were seated on the floor in a circle when I arrived.  After the teacher introduced me, each of the girls shyly introduced themselves, along with what they were most grateful for that day.

To be honest, I’m used to talking with adults, not middle school students. Being in a circle of sweet, fidgety, talkative girls was so humbling and real. These girls are going to “come of age” over the next five to seven years. They’ll experience growing pains, friend drama, and anxiety over grades. They’ll take risks and make mistakes. But today, they were full of joy and innocence, grateful for their friends, families, and opportunities to play a variety of sports with coaches they loved and admired.

“Ah,” I thought to myself. “Their lives will change greatly as they meander through the challenges of adolescence – and they will need so much support along the way.”

I talked with the girls about how each of us has an unfolding story. I explained that the more internal abilities we develop, the more likely our stories will reflect contentment and well-being. The girls really grasped the concepts of the Internal Compass as we began to examine each of its eight abilities. Their teacher had made a wonderful graphic for us to follow and discuss. 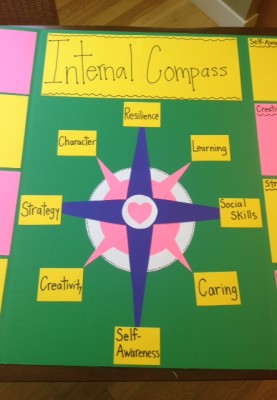 1. Middle School can be a Scary Time

The girls talked about how daunting it was to ride the bus with high school seniors – how the seniors made fun of them and said “bad words.” They said they didn’t want to grow up to be like them. Their effective strategy for this was to avoid the older kids and not listen to the words that made them feel uneasy. They would reserve seats for each other and talk loudly to avoid hearing what the older kids were saying.

2. Students Want to do Their Best, Despite Obstacles

As the girls wiggled with youthful energy on their mats, they talked about how they drew on their inner resilience to overcome challenges. One girl had been hurt in soccer that day and had received a mild, yet scary concussion. Two others were involved in caring for her and remained by her side until she saw the school nurse.

3. Early Adolescence is a Critical Time for Peer Friendships

We talked about the importance of social skills and particularly about learning to listen. Often, the girls were so excited to answer my open-ended questions that they waited patiently with their hands in the air for my nod to talk instead of truly listening to the girl who was speaking. When I brought this observation to their attention and pointed out how listening was one of the most important things we do with each other, there was a palatable shift in the group. My brief and direct feedback about listening brought self-awareness that continued through the remainder of our conversation.

The girls told stories of how they were different from each other and their siblings, how they were most drawn to friends with similar character traits, those who showed caring and empathy toward each other and who exhibited strengths like honesty, courage, and persistence.

All of these young girls were privileged to live in a community that offered them an exceptional education. Even at their young ages they seemed to understand the difference between getting good grades and what it meant to be engaged in learning. One girl shared how she read ahead in her book because she was so interested in the topic. Several others talked about a science project that excited them and piqued their curiosity.

Creativity was tougher to grasp. Some believed creativity would evolve from studying hard and focusing on school. Others talked about how they could be creative, even in sports. For example, one girl described the creative moves she made on the soccer field could help win a game.

The Internal Compass is a metaphor for how we are guided through life by our internal abilities. When our inner strengths are well-developed, we are more likely to achieve life success, happiness, and well-being. This group of middle school girls not only understood this concept, but built upon it during our conversation.

One girl connected the internal compass to many of the skills needed in soccer – and in life. “In soccer,” she said, “you never move in a straight line. You’re always moving up, down, back and forth. You have to use strategy. Otherwise, you won’t achieve your goal. When you make a mistake, you learn. When you fall down, you get up. Soccer is a team sport, so it teaches you to care about the kids you play with. In the process, you become more aware of yourself and others.”

I couldn’t have said it better myself!

6. Middle School is a Perfect Time to Teach Kids about Their Internal Compass

With the help of parents and teachers, the middle school years are an optimal time to help young people understand and develop the internal abilities that will last a lifetime. I am grateful to this small group of middle school girls for showing me how natural it is to talk about their stories — and the hopes, fears, and challenges they face as they journey through adolescence. I’m inspired by these girls and their teacher for wanting to excel in ways that test scores and grades cannot measure.

You can now download a free handout that outlines some detailed ways parents and teachers can impact the development of these eight internal abilities. As the curriculum is developed for these types of small group discussions aimed at middle school students, I hope to be able to share it with you. In the meantime, please feel free to use the compass with your own children/students, and let me know how you are teaching and reinforcing the development of these vital skills.